Moving house with a cat

Cats have a unique relationship with their environment: a cat’s space is their haven, their territory and the lens through which they view the world. No wonder moving house is so stressful for many cats!

Pawshake Marketing Manager Jess recently moved with her cat, Benjamin. Here are a few pieces of wisdom that she gained from the experience. 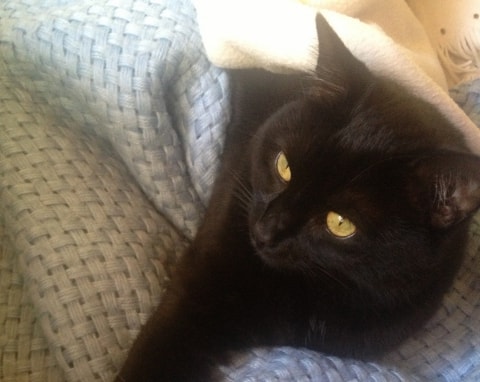 My partner and I adopted Ben from a shelter when he was a kitten, and all he has ever known is the rambling brick cottage we called home.

All that was thrown into the air when a change of ownership meant we had to move. Alongside the usual stress, we were really worried about how our shy boy Ben was going to go. I’m pleased to say there is a happy ending – Ben is already exploring his new home, enjoying all his new toys (I love spoiling him!) and back to his regular sleeping pattern.

Here are a few pieces of wisdom that I learnt along the way from fellow cat owners, helpful veterinarians, Pawshake pet sitters and of course, Ben himself.

1 – Keep the move as clean as possible.

By clean, I mean swift, efficient and unsentimental! Ben stayed in the spare room with his food and litter tray while the big furniture was moved out of the house, and I remained with him while the new place was set up. If not me, I would have booked a Pawshake sitter just to hang out with him and play with and cuddle him.

I avoided ‘showing’ him the empty house but brought him straight to the new place with everything ready to go.

2 – Give your little lion a den

Every cat is different, and some cats might adapt really quickly to new surroundings. Ben was just not one of those cats….he stayed hiding in his carrier for hours after the move.

We set up a small room for him, as the entire home would have been overwhelming to begin with A quiet laundry or bathroom is ideal – Ben had his food, his litter tray and water waiting for him there.

For the first few days, Ben would sleep all day then wake from 3am till 6am and run madly all over the house. Then during the daylight he would nervously hide again….most likely because of the brightness, the new noises from outside and the overall strangeness of a new space.

Eventually I coaxed him out for an afternoon and, much to our relief, his sleeping pattern returned to normal. Don’t despair if your cat’s behavior changes or they deprive you of sleep - there is a lot going on and with time, things WILL settle down!

Keep unwashed blankets, cushions and toys from the old home to bring into the new. The familiar smell is incredibly reassuring – and I can’t speak more highly of plugging in Feliway around the house!

If a cat could look delighted, that’s the only way I can describe Ben’s expression when he saw his favourite climbing tree in this strange new room. That climbing tree has never been scratched so hard.

Cats are intuitive critters and it’s very likely Ben picked up on our stress. The breakthrough really happened one night when we decided to stop fretting and just let Ben do what he needed to in his time.

We would sit with him in his little room and speak to him with our special ‘Ben’ voice just like we always had, and relaxed a bit ourselves. That night, he came out to explore on his own – and we have no doubt this is from our extra reassurance and chilled-out attitude.

Every cat is an individual. Some cats might not emerge from behind the couch for three weeks (if you think they are genuinely panicking, do speak with your vet). Some cats might come out straight away, or behave in ways you haven’t seen before.

Moving is hectic and it’s easy to fall into the trap of feeling guilty, worried or planting emotions onto your pet that they just may not be feeling. But have faith and be patient. I will definitely be easier on myself next time, as our furry friends are more resilient than we think.

Have you moved with a cat? How was your experience? We’d love to hear in the comments!

Boarding your dog | What to take?

What will your pet need during their dog boarding stay? Here are all of the things you should bring along so that your pet has the perfect mini-break.

Some pets are more relaxed than others when taking medicine, however, it’s common for pets to hate this experience. Here's what to do if so.

Just like us humans, dogs can get dementia in their older years. Here is a guide to diagnosing and preventing dementia in your senior dog.